Once again we are seeing a large retail chain under threat. For the time being, with the takeover of House of Fraser, that threat has been averted, but for how long?. Over the last decade, retail chain after retail chain has fallen victim to overseas multinationals selling online from tax havens. How can we protect our retail heritage and at the same time ensure that the multinationals are paying tax on everything they sell in the UK?

The answer is a Lexit Brexit. After we leave the EU, the UK will be no longer fenced in by the EU trading laws that favour the tax avoiding multi-nationals. After a Lexit Brexit, a Green Party in Government will be able to ensure that all trading in the UK is done through a UK institution and ensure all profits are taxed when they are distributed either to an individual or to another corporate entity (see tax voting paper being put to the 2018 Green Party autumn conference in Bristol). 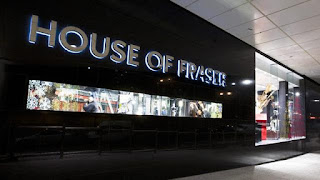 Such radical reforms of the taxation system are impossible in the straitjacket imposed by the unelected officials in Brussels who control the EU fiscal policy. Outside of the EU, we can, if we have the right Government, protect British industry, agriculture and commerce and begin to, at last, reduce the massive and unsustainable balance of trade deficit we have with the rest of the world. Rather than being a threat to the retail sector, Brexit could be its saviour.

Posted by Leslie Rowe at 16:02 No comments: Links to this post

The UK exit from the EU: a catalyst to re-unite Ireland after 200 years?

At the EU referendum in 2016, I predicted that the UK leaving the EU made the possibility of a referendum on a united Ireland much more likely, thereby eliminating any border problem. (See 2016 blog below).

If polls suggest that if there is a majority in Northern Ireland in favour of reuniting Ireland, the UK government, under the Good Friday agreement, is legally bound to offer a referendum on reunification.

And polls do show that. According to "The Week", polling of Northern Ireland residents by LucidTalk in December 2017 found that - in the event of no deal between the UK and the EU, support for remaining in the EU through reunification with the Republic was marginally greater (48%) than support for staying in the UK (45%).

Driving support for reunification is thought to be the fear of a hard border between the north and south. The UK government and leaders in Dublin and Belfast have all repeatedly said border posts and physical checks, synonymous with the chaos and conflict of the Troubles, will not return.

However, Ireland and the EU remain adamant that they want to keep Northern Ireland in the customs union, a plan that has been roundly rejected by both parties in the Tory / DUP alliance. Both Ireland and the EU have also rejected the use of technology to police trade between the north and south. However, a frictionless border is incompatible with Theresa May’s promise to leave the EU customs union.

As part of the alliance deal with the Tories, the DUP received assurances that there would be no referendum or border poll on Irish unity. As we have seen, this appears to contravene the Good Friday agreement, so probably could be successfully challenged in court.

Following the collapse of power-sharing talks, and the effective re-imposition of direct rule by Westminster, Reuters said that Irish nationalists “fear that that their unionist rivals may effectively govern the province through their influence of May”.

In a Guardian article, Powell, who was the chief British negotiator during the Good Friday Agreement talks called the Tory-DUP alliance a “a terrible mistake with lasting consequences” that “would risk undermining 20 years of hard work”.

Northern Ireland voted Remain by 56% to 44%, so is at odds with the English and Welsh who voted strongly for Leave. But a U.K.-wide referendum cannot automatically over-ride the terms of the Ireland-wide referendums on the Good Friday agreement of 1998, and a majority within Northern Ireland for remaining in the EU.

The obvious solution to this impasse would be to call for a border poll to give people the option of remaining within the EU through Irish reunification—especially if there is no alternative that respects the clear local majority preference to remain within the EU. The very same compromise may also weaken the pressure from the Spanish government for the U.K. to cede sovereignty over Gibraltar. Gibraltar also voted to remain in the EU.

This might just then be the catalyst that would solve the Irish problem; 200 years after Ireland joining the UK caused it.

Posted by Leslie Rowe at 17:42 No comments: Links to this post

Campaigner for a Democratic Europe